Around 1957, Soke Masaaki Hatsumi met and began training with Toshitsugu Takamatsu Sensei.  For 15 years, Hatsumi traveled to and trained under a man often known as the Last Ninja.  When Takamatsu Sensei passed away in 1972, Hatsumi inherited 9 Schools (Ryu-Ha) and eventually founded the Bujinkan organization, taking students from all over the world.  Early on, westerners entered that door and brought “ninpo” back to the States during a Ninja Craze.  It wasn’t until much later we would fully understand the depth of what Hatsumi Sensei was teaching.

In 2008, Sean and Genevieve began training under Gabe Logan while living in Marquette, MI.  They traveled to seminars with the Residents (foreigners living in Japan and training directly under Hatsumi Sensei) and eventually Japan itself.  They passed their Godan tests in 2015 in the same week.

The Dojo trains with several great instructors from throughout the Midwest (such as Jess Attilli, Pat Lee, Charles Gelm, Rob Hartung and more).  The connection to Japan is important and should be maintained whenever possible.  Being a part of the Blue Water Dojo involves the students in the broader Midwest Bujinkan Community and Midwest Tai Kai annual event.  Genevieve is hosting the 12th Annual Midwest Taikai in August, 2019.

As of 2019, the dojo has grown to have three instructors, including a licensed shidoshi-ho. 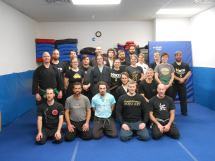 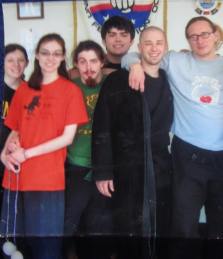